Epsom salt is a well known ingredient used in baths since long ago, offering relief to pains and aches. 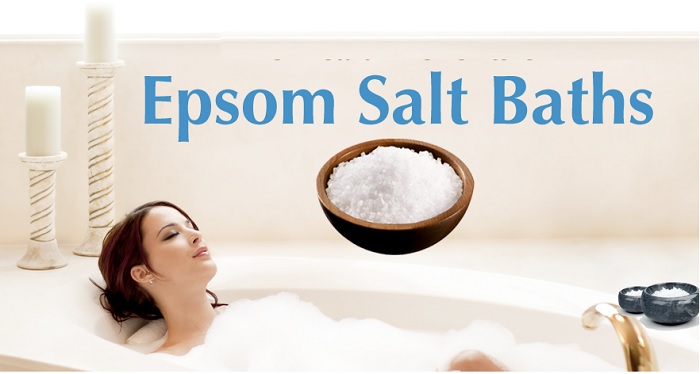 What Is Epsom Salt?

Contrary to what the name implies, it isn`t real salt because it doesn`t contain sodium chloride, magnesium sulfate being the most important component of Epsom salt, although we`ll use the term “salt” for the purpose of this article.

Owing to its stress relieving and anti-inflammatory values, Epsom salt has made wonders for expecting mothers, offering them relaxation in 9 out of 10 cases.

How to Use Epsom Salt during Pregnancy?

Expecting mothers are able to use this “salt” while soaking into a tub. This salt dissolves quite easily in water. Lots of athletes are making use of it in their bath in order to alleviate sore muscles. They claim that it aids muscles recover much faster after a workout.

Combine around two cups of this salt in a bath that is warm and soak around twelve to fifteen minutes. Make certain to maintain the temperature of the water at a comfortable level. Increasing the temperature of your body too much by soaking in a rather hot tub is harmful for your future baby. For this particular aspect, hot tubs need to be avoided while pregnant.

Due to the fact that this is an inorganic salt, it helps the digestive system as it aids in replacing magnesium from our body and raises the content of water in our intestines. It`s quite beneficial to expecting mothers as it prevents bloating, which obviously is a common issue for a woman who expect a baby.

Despite of being a very powerful anti-inflammatory ingredient, its content of magnesium sulfate enhances the circulation of blood, minimizing the buildup of fluid. Therefore, if you`ll take a bath using Epsom salt, you`ll help reduce swelling, which mainly appears in the last trimester of pregnancy.

Still, if you may notice extreme swelling on your hands or face, you should get in touch with a doctor as soon as possible as it may be a symptom of preeclampsia.

This salt replenishes salt in the pregnant woman`s body when salt isn`t too present in her diet. So it could be said that Epsom salt meets salt deficiency.

Because there are chances for the blood pressure to be increased during pregnancy, future mothers are advised to eat less salt while pregnant. Still, this may lead to various deficiency, especially when it comes to the balance of salt in the human body.

Research has shown that if you soak this kind of salt for twelve minutes or so, it may raise the levels of magnesium in the blood. As you may already know, magnesium represents a very important nutrient, but during pregnancy is really vital. It helps regulate the levels of blood sugar and cholesterol. It could help in calming anxiety and promote states of relaxation.

Lots of expecting mothers claim that Epsom salt help with hemorrhoids as well. Constipation is a common side effect when it comes to pregnancy, and this salt can aid relieve hemorrhoids which might pop up due to this reason. As already mentioned, it has anti-inflammatory values, which aids eliminate or at least reduce hemorrhoids.

It Acts as a Laxative

Epsom salt is considered a natural laxative, aiding in cleaning waste matters from your colon and raising the content of water in the intestines. Although choosing to ingest Epsom salt during pregnancy isn`t really a good idea, however, you could soak in it for around 30 minutes and repeat the process at least twice every week in order to keep constipation away.

This salt is acting like a wonderful stress buster and aids future mothers keep calm and remain cool. Consumption of Epsom salt raises the level of serotonin in the woman`s body, improving emotional state and moods. It aids pregnant women to have good nights of sleep as well.

So, there are studies which suggest that magnesium sulfate has a tendency of absorbing through the human skin. This is also the reason for which is used in baths. However, some scientists claim that the amount of salt absorbed is so small that it cannot really be taken into account.

No one actually claims that Epsom salt is harmful, meaning that lots of doctors see it as a safe method of finding relief, even if this relief cannot really be measured scientifically.

The author of “Modern Hydrotherapy for the Massage Therapist, Marybetts Sinclair, outlines that a bath with Epsom salt offers an essential treatment for future mothers experiencing swelling.

According to American Pregnancy Association, more commonly known as edema, this particular swelling is normally quite mild and takes place in some of the extremities of expecting mothers, most often in wrists, feet, hands and ankles, usually due to high fluids in the body.

Although lots of people use this kind of ingredient as a cheap oral laxative, you should still have a discussion with your doctor before choosing to use it before conception or during pregnancy. When considering it to use it as a saline laxative, this salt operates by shifting fluids in the intestines and other close body parts. – Click this link!

While Epsom salt serves as softener of stools, it can also produce strong contractions and cramps, which might raise the chances of having specific pregnancy-related complications, especially if you had previous miscarriages.

According to the co-author of “Drugs during Pregnancy & Lactation,” M. Rost van Tonningen, the loss of fluids in the body along with higher content of magnesium which may occur when choosing to use this salt for laxative purposes might affect expecting mothers who have a history of kidney or heart issues in a negative manner as well.

Which Of The Following Are Barrier Methods Of Contraception?
How Often Should You Change A Tampon?
Why Do People Get Circumcised?
How Do You Know If Your Baby Is Head Down?