If you`ve decided to find out your baby`s gender, you`re most certainly thinking about performing an ultrasound. Normally, this ultrasound will be performed in mid-pregnancy. It`s known as a fetal anatomy survey and it`s performed to look for any fetal abnormalities, not just to find the gender of your baby. 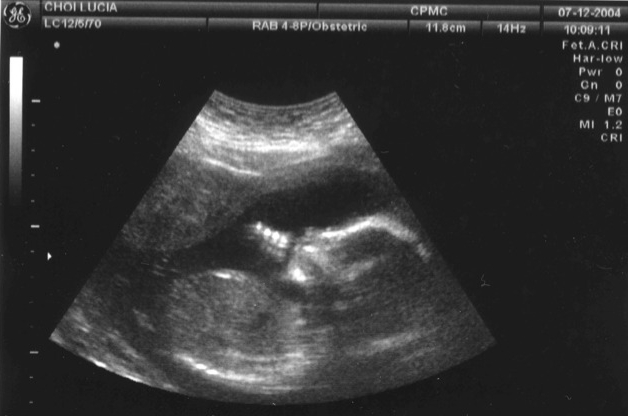 The accuracy of this particular report will very much depend on several factors, among which the technician, the equipment used or the baby`s age. Still, there`re particular signs in the ultrasound images that a technician knows how to use to find out the baby`s gender.

How Can You Tell if It’s a Girl or Boy on Ultrasound?

When the doctor is looking for a boy on ultrasound, he`s searching for something known as the turtle sign. This is the spot where he`s able to see the penis`s tip picking out from the body. This might be difficult to see on certain babies, reason for which there is a series of signs to guide you during an ultrasound examination. The baby`s position and gestational age often play an important part in how to interpret what can be seen.

A reliable method is performing amniocentesis in order to check the chromosomes of the baby. This particular test is generally performed on a pregnant woman who is 35+ years old, with the intention of finding any possible genetic issues.

When Can You Tell the Gender of the Baby on an Ultrasound?

This is actually among the most frequent questions parents ask. Most pregnant women perform an ultrasound at about the weeks 18 – 20 of pregnancy (around 4 ½ – 5 months). Typically, at this pregnancy stage the baby`s gender can be determined; however, sometimes this may not be so. The baby`s position during the ultrasound examination is among the most essential aspects in the doctor`s ability to tell the baby`s gender, and there`s practically no way whatsoever to influence this aspect. For reasons that are obvious, it`s generally much easier to see if the baby is a boy or not.

Can an Ultrasound Be Wrong?

Ultrasound in the middle of pregnancy is often used to find out the gender of the future child by having the sonographer look for the baby`s genital organs. Now it`s the time when it will be announced, “it`s a girl!” or “It`s a boy!” Unfortunately, for certain families, this particular statement may turn out to be wrong.

Can an ultrasound examination be wrong about your baby`s gender? Of course!

How often does it happen? It`s rather hard to known and track these things as there`s not a real registry kept.

How does this happen? Here are several examples:

Are you curious about the gender of your little tenant that rented your uterus for the next 9 months?

Even from the beginning of time, those who are about to become parents have tried to guess if the baby that they are waiting for is a girl or a boy. We`ll throw some light on 7 of the most common myths about the predication of the baby`s gender.

Although this particular myth has circulated for decades, there`s only one scientific study to support it. In 1994, a study at the University of Kentucky has reached to the conclusion that the heart rate of the fetus can be used to correctly predict the gender of a future baby with an accuracy of almost 91% for male fetuses and 74% for female fetuses.

Any other studies made before or after this one, has reached the opposite conclusion – that the heart rate cannot be used to predict a baby`s gender.

If you managed to pass through the entire 9 months without anyone trying to predict the gender of your baby based on the shape of your belly, then you are lucky!

“If you experience severe morning sickness, you`ll have a girl.”

Theories as this one are heard for thousands of years, but a recent study has put even more fuel on the fire.

Some Swedish researchers have discovered that 56% from pregnant women hospitalized with severe morning sickness have given birth to a girl. Even if this study seams to prove something, something which led to more than a few arguments circulated among obstetricians, the results aren`t really definitive.

“If the baby is very active, then you`ll have a boy.”

Here`s another theory based on some assumptions of gender, while women are more peaceful on this matter.

What this theory doesn`t take into consideration is that all fetal movements that a woman sense is a matter of perception. If she “runs” every day with various physical activities, it`s possible for her not to be able to fell more than only the strong kicks of the baby. – Learn more!

This particular method of predicting the gender of the child functions exact like a crystal ball. The micro-muscle tremors, over which you have no control, cause the ring to move in a certain direction – a sensation which may seem weird, but which won`t tell you anything about your future baby`s gender.

“The Chinese conception calendar may tell you if you`ll have a boy or a girl.”

The Chinese conception calendar is an idea of a scientific man from the 13th century, which pretends that can predict the gender of your future child through the connection between your age, the conception month and of your baby`s gender. If this has a pretty good reputation in China (having a pretty good accuracy), the tests performed in USA didn`t proven to be positive.

So, if these myths fail constantly, why do we continue to revive them again and again?

According to experts, there are 2 factors which appear in these cases: the first one is that you have a 50/50 chance to be right every time you try to predict the gender of your future baby; the second one is that there are more chances to remember the successes and not the failures.

Our advice! If one of these tests will convince you to fill a wardrobe with pink dresses, be sure you can do something with them in case of failure!

How To Wean A Baby From Breastfeeding?
What Causes You To Poop Blood?
Can You Eat Peaches While Pregnant?
Natural vs. Synthetic Vitamins: What Do We Choose?