This illness is apparently overlooked, because the pain caused is often confused with other medical conditions, affecting around 1.7% of women and over 100.000 women every year. PID, as it`s more commonly known, occurs in almost 70% of cases of women up to 25 years old, the maximum incidence is between 20 and 24 years old, and is among the most frequent sex-related medical conditions. 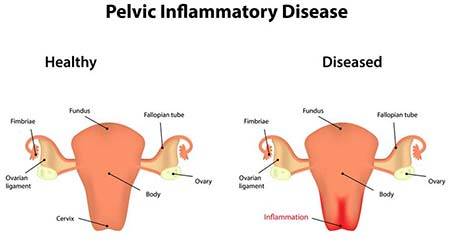 What Is Pelvic Inflammatory Disease?

Pelvic inflammatory disease is a general name for an inflammation of the woman`s upper reproductive organs. This is common, but not always, a medical complication of a STD.

PID may include the infection of:

PID can be considered quite an unpleasant complication of infection with Chlamydia trachomatis or Neisseria Gonorrhoeae, and other microorganisms with secondary role as Ureaplasma urealyticum. It often is a polymicrobial infection that requires a long treatment and subsequent verification by the gynecologist.

Also, some invasive uterine maneuvers that can lead to PID may include:

Other causes may include:

A weak immune system favors the expansion of the infection in people with debilitating diseases, diabetes, and those undergoing chemotherapy. – Read more!

In most cases, a pelvic inflammatory disease has a long asymptomatic evolution, of course, depending on the infectious agent and the immune system. When the symptoms appear, they could vary from mild for severe, painful signs.

The most common symptom is pain in the lower abdomen. This may occur suddenly, it may be accentuated when walking and during sexual contact. The pain may be in the form of cramps, or as a constant pressure and local irritation. The pain may also be experienced when urinating.

Other signs may include:

The most important risk factor is an active sexual life with several partners and no protection. The probability of getting this STD is rather high.

The most frequent way of transmission is sexual intercourse, more specifically gonorrhea and Chlamydia, the illness ascending from the vaginal to the cervix, uterus and fallopian tubes. It might due to an infectious neighborhood process, like diverticulitis or appendicitis, but this rarely takes place.

At present, a lot of women who aren`t able to conceive receive a diagnosis with PID, infertility being a complication of the disease due to the fallopian tubes being affected. It`s estimated that up to 10% – 15% from women with this disease may become infertile in this way.

Ectopic pregnancy occurred due to PID affects 10% of patients and 20% from them manifest chronic pains.

A complication, which can be deadly, is the formation of abscesses not only in the fallopian tubes, but also in the perihepatic upper abdomen. Breakage of these abscesses may lead to acute peritonitis that requires immediate surgery.

How Do You Diagnose Pelvic Inflammatory Disease?

Diagnosis can be made by the gynecologist and family doctor, emergency physician or internist after correlating the imaging and laboratory investigations with anamnesis. Usually, the gynecologist is the one monitoring the treatment of PID and its complications.

When anamnesis is involved, the patient shares the symptoms and then the doctor observes the vaginal sensitivity. An ultrasound offers little data, but it may see any developing abscesses. Lab tests may reveal signs of infection, and the examination of vaginal secretion may identify the concerning germs. It can also be done an exploratory laparoscopy surgery.

Prior to PID diagnosis, a differential diagnosis is required; for example, other causes of acute abdomen – appendicitis. Also, the doctor will perform a pregnancy test to check if there`s an ectopic pregnancy installed.

Can You Have a Pelvic Infection without Having an STD?

Most of the time, this medical condition is triggered by an infection from 2 common sexually transmitted diseases: Chlamydia and gonorrhea. However, the number of women experiencing this illness has decreased a lot in the last few years. This might also be because more and more women get tested on a regular basis for these 2 infections.

Can PID Give You Cancer?

Untreated pelvic inflammatory disease may lead to complications on long term, which includes cancer, chronic pelvic pain, infertility or ectopic pregnancy. The illness is caused by bacteria which spread from the vaginal or cervical cavities. In some extreme situations, untreated pelvic infection can lead to death.

How You Get Rid of PID?

The sooner is this disease diagnosed and there are no complications, the more efficient is the treatment and easier to be tolerated by the patient.

First of all, the IUD device is removed if it exists, and any sexual contact will be avoided.

In most cases, the treatment involves drugs, but systematic antibiotic as well as treatment with pessaries. It takes 14 days and what is important is to return to a new medical consultation after 3 days, then in 1 week and then again in 2 weeks, so that the doctor can track the evolution of the disease.

Usually, the symptoms disappear completely after 3 – 5 days, and patients consider that they should stop treatment, but it`s mandatory to comply with the doctor`s instructions. The infection is polymicrobial, and its expansion is rather high, so it`s necessary a longer period of time for the drugs to act. After 6 weeks, it`s recommended a new medical investigation to confirm the healing.

Patients may also take analgesic/anti-inflammatory drugs to control the pain and fever.

In some situations, treatment lasts more than 2 weeks and it may require hospitalization if the patient`s situation demands it or there are complications. Antibiotic treatment can be administered intravenously; abscess is drained under ultrasound guidance; adhesions on the fallopian tubes can be resolved laparoscopically for fertility re-installation.

It can be intervened surgically in cases of peritonitis and other complications. At the same time, the partners need to follow a treatment with medication to prevent any new infection or transmission to other people.

How Long Does It Take to Heal Pelvic Inflammatory Disease?

You`ll start feeling a lot better after 2 or 3 days from starting your treatment. You have to make certain you`ll be finishing your entire treatment as your doctor`s prescribed you.

If you don`t treat your infection, it might spread to other body parts or create an abscess in your ovaries or uterine tubes. It may also lead to chronic pelvic pain.

Can PID Come Back After Treatment?

Even after being treated, this condition might return. This may occur if you are infected by another sexually transmitted disease. But keep in mind that once you have had this illness, bacteria which typically would be harmless might be more certainly to infect the upper genital tube. This will obviously mean you`ll get infected with PID again even if you don`t get another sexually transmitted disease. With each PID infection, your chances of complications increase.

A method of avoiding the occurrence of this disease is to prevent STDs, so it`s recommended to use condoms if the woman isn`t in a monogamous relationship. There`s no efficient screening for PID, but screening can be made for the most implicated bacteria in this pathology: Neisseria Gonorrhea and Chlamydia trachomatis infections associated with proper treatment for the infection.

In conclusion, pelvic inflammatory disease is a general complication of a STD, so they both can be prevented by using a condom. The symptoms are rarely present from the beginning, but if a medical investigation is made as fast as possible, future complications can be avoided. Treatment generally includes medication, and rarely surgery.

Get in touch with your doctor if:

What Are The Symptoms Of Cholestasis Of Pregnancy?
What Is The Best Potty For The Little One?
Vanishing Twin Syndrome: Pathogenesis & Diagnosis!
13 Pregnancy Side Effects That May Take You By Surprise!