Endometriosis is known as kind of a “Cinderella” of the gynecological diseases, as even now with all the scientific progress, medicine has failed to offer a complete explanation for the particular disease. 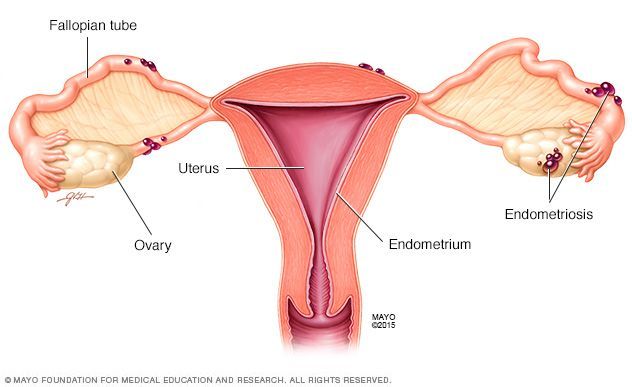 Endometriosis is a progressive disease which affects 10 – 15% of women during reproductive years and the second most common infertility cause, as 30% – 40% of women with this disease are infertile.

The physical along with the soul pain, given by the inability of having children, lead to depression, isolation, fatigue or apathy.

If we are to go more in-depth, endometriosis is an abnormal increase in cells (endometrial cells), similar to the one which form the interior of the uterus, but in a different location outside the uterus. Endometrial cells are the ones that break off each month during menstruation. They attach to the tissue outside the uterus and are known as endometriotic implants. These are most frequently found on the ovaries, fallopian tubes, outer uterine surfaces as well as on the surface of the pelvic cavity. Also, they can be found in the vagina, cervix and bladder, although less frequently than other pelvic locations. Rarely, endometrial implants may appear outside the pelvis, on the liver, old surgical scars and even around the brain or lungs. Endometrial implants, even if they may cause issues, they are benign, meaning they won`t lead to cancer.

Who Is Affected by this Disease?

Endometriosis affects women during their reproduction period. The exact spread of this specific disease isn`t known because a lot of women might have it without showing any symptoms. It`s estimated that endometriosis affects over 1.000.000 women (around 3% to 18% women) in the U.S. This is one of the main causes of pelvic pain and a common reason for laparoscopic surgery or hysterectomy in this country. Estimations suggest that around 20% to 50% of women treated for infertility have endometriosis, and up to 80% of those with chronic pelvic pains may be affected by it.

While most cases of endometriosis are diagnosed in women with ages between 25 and 35 years, endometriosis has been reported in young girls with ages of 11 years old. This disease is rare in women in menopause. This is a lot more common in white women in comparison with Asian or African-American women. The latest research suggests that endometriosis is a lot more common in tall and thin women who have a low body mass index. Also, postponing a pregnancy to an older age is believed to increase the risk of getting this disease as well.

Which Are the Causes of Endometriosis?

The causes still remain unknown, but there are some theories. What it`s for sure is that the disease is strictly related and worsen by estrogen, the female hormones. Some experts claim that the menstrual tissue is pushed retrograde in the fallopian tubes at menstruation, enter in the abdominal cavity and there implants in the pelvis, therefore leading to symptoms of endometriosis. Because most of the times during menstruation, the tissue bleeds the same as the endometrium, the blood may cause irritations of the surrounding tissues that inflame and forms cysts or scars. Most doctors agree with the fact that most women have retrograde menstruation through the fallopian tubes, but only those who have immunity problems manage to develop endometriosis. – Read more on this!

Other theories attest including the hereditary predisposition of the disease`s occurrence. Usually, if the mother has this illness, the daughter will develop it, but in a more severe way. Also, it was proven that endometriosis occurs in women with hysterectomy as well (uterus removed, which leads to the disappearance of menstruation) or, in more rare cases, in men to whom it was administered estrogen after a prostate surgery.

Immune dysfunctions (autoimmune disease) are also believed to be related, but it isn`t yet known if they are related to the causes or consequences of the disease. There are also theories related to the toxins from food or the environment, which have an effect on the reproductive hormones and destroy the cellular membrane.

Which Are the Signs of Endometriosis?

Not all women with endometriosis show any symptoms. Still, from those who present signs, they may include pelvic pains and infertility. Pelvic pain occurs before or during menstruation, and decreases after period. Some women may feel pain or cramps during intercourse, intestinal transit or urination.

The intensity of the pain may change from one month to another and varies a lot. Pelvic pain depends partially on the location in which the endometrial cells have implanted. The implants are deep and may cause pains in the areas with a lot of nerves.

Endometriosis is one of the factors of infertility. During laparoscopic examinations for infertility, some parts of endometrial tissue can be found outside the uterine cavity. Although it`s not exactly known the reason for the infertility decrease, this may be caused by some anatomical and hormonal factors. Endometriosis may affect fertility by production hormones and other substances that have a negative role on ovulation and fertilization.

Among others signs of endometriosis, we remind:

According to some research, women with endometriosis seem like having an increased risk of developing certain types of cancer in the ovaries, known as ovarian epithelial cancer. This risk may seem higher in women with endometriosis and primary infertility (those who haven`t had a child), but using oral contraceptives, which are sometimes used when treating this disease, may seem to significantly reduce this risk.

The reasons for associating endometriosis with epithelial ovarian cancer aren`t clear. One of the theories is that endometrial implants suffer a cancerous transformation. Also, another possibility is that the presence of endometriosis may be related by other genetic or endometriosis factors, which increase the risk of ovarian cancer.

How Is the Disease Diagnosed?

Endometriosis may be diagnosed based on the symptoms of pelvic pain and the conclusions drawn during physical examinations. On occasion, during a rectovaginal examination, the doctor may feel nodules (endometrial implants) behind the uterus and along the ligaments attached to the pelvic wall. Other times, there are no nodules felt, but the examination itself causes unusual pains and discomfort.

Unfortunately, nor the symptoms or physical examinations can establish with certainty a diagnosis for this disease. Imaging studies, such as ultrasounds, may be of some help in excluding other pelvic disease and may suggest the presence of the disease in the vaginal areas and those around the bladder, but a clear diagnosis of endometriosis still cannot be made. For a precise diagnosis, a direct visual inspection is necessary inside the pelvis and abdomen, as well as a tissue biopsy of the implants.

As it follows, the only correct method of diagnosing the disease is in the moment of the surgery, either by opening the belly by a big incision (laparotomy), either through a small incision (laparoscopy).

Laparoscopy is the most common surgical procedure for diagnosing endometriosis. Laparoscopy is a minor procedure which is performed under general anesthesia or in some cases, a local one. This is usually performed as an outpatient procedure (the patient can go home at the same day). This procedure is performed by swelling the abdomen with carbon dioxide through a small incision in the navel. Then, a long and thin tool (laparoscope) is introduced through the swollen abdominal cavity to inspect the abdomen and pelvis. The abdominal implants can then be seen directly.

Pelvic ultrasound and laparoscopy are also important to exclude malignancies (ovarian cancer), which may cause signs that imitate the symptoms of endometriosis.

You need to immediately visit a doctor if you feel a sudden pelvic pain.

Note: If during menstruation, the woman presents mild pains without other signs or issues, she may expect to a more abundant menstrual flow, after which she needs to talk to her doctor.

Can Endometriosis Be Healed?

Although this disease doesn`t heal by itself, the recommended treatment may remove pain and infertility. The treatment depends on the severity of the symptoms and the desire to remain pregnant. Only for pain, it`s recommended any hormonal therapy which once that reduces the increased level of estrogen, it also determines a decrease of endometrial proliferation and consequently reduce pain. In order to remain pregnant, both infertility and surgical treatment associated with the disease are recommended.

If a woman has pains or experiences bleeding caused by this disease and doesn`t want to remain pregnant any time soon, it`s recommended to follow a treatment with birth control pills and non-steroidal anti-inflammatory drugs; they are enough to control the pain. The birth control pills determine the regression of endometrial mucosal proliferation and manage to remove pain in most women. Also, they prevent worsening the disease. The anti-inflammatory drugs prevent bleeding, inflammation and pain. Most women use these drugs safely, having only a few side effects if they are taken for longer periods of time. – Click for more!

If the symptoms are severe or the contraceptives and NSAIDs aren`t efficient, a stronger hormonal therapy might be attempted with hormone analogues that release gonadotropin (GnRH), high doses of progesterone, danazol and intrauterine progesterone. Some doctors may recommend performing a laparoscopy first to see the signs of endometriosis present in the pelvis. Although it`s often not necessary unless there`s a chance of having another issue.

Is Wearing High Heels While Pregnant Risky?
14 Interesting Facts You Probably Didn`t Know About Sperm!
Melasma (Mask Of Pregnancy): What Is Chloasma & What Causes It?
Thick White Discharge: Different Types & What to Expect?